Osian Pryce won the Visit Conwy Cambrian Rally for the first time in his Volkswagen Polo GTI R5 to maintain his lead in the British Rally Championship with just one round remaining.

The result also continues his incredible record of finishing on the BRC podium in every round so far this year, with his success tally now standing at two maximum points scores (including his bonus Joker win on the Mull Rally), second on the Grampian Rally and Trackrod Rally Yorkshire and third on both the Neil Howard and Nicky Grist Stages.

Osian leads the BRC drivers’ standings by eight points when you take one dropped score from six rallies into account. With five scores from seven rallies counting towards the title, another score will be dropped on completion of the final Today’s Ulster Rally (Saturday 20 November).

Osian started the Cambrian Rally at a blistering pace, taking an incredible 10.4 second lead on the opening 5.93-mile Gwydir stage in his Melvyn Evans Motorsport machine.

It was an extremely brave and skilful flat-out performance, as Osian and co-driver Noel O’Sullivan weren’t entirely sure what the surface conditions were like after torrential overnight rain. Whilst Osian admitted to taking a few calculated risks and surviving a couple of near misses with banks and ditches, his early attack tactic had paid dividends.

The opposite driving strategy was employed after title rival Matt Edwards hit problems on the opening stage of the afternoon loop (SS4) which left Osian with a 56.8 second lead. He immediately reduced the pace as from then on it was a case of protecting his advantage and making sure he reached the finish unscathed.

That didn’t stop him setting his fourth fastest time of the event on the penultimate stage, however, as he arrived at the finish on Llandudno promenade with his victory margin increased to 1min 04.6secs.

“I knew that to beat Matt on his home rally, something which a lot of people said couldn’t be done, that I would have to try to get the job done in the first two stages,” said Osian.

“We did exactly what we needed to do and backed off a little bit on stage three. With a ten second lead you’re already thinking that if you don’t make a mistake it’s going to be hard for someone to take a big chunk of time out of you on stages that are repeated.

“The plan was to then use our heads on the afternoon loop. I was expecting a counterattack from Matt, but we knew what we needed to do to maintain our advantage.

“It was really unfortunate that Matt hit problems on the opening stage of the afternoon, and that of course completely altered our approach. From then on it was a case of getting the car home to the finish. It was painful sometimes in the rougher and more slippery sections because we were going so slowly, but when conditions were okay we were able to press on a little bit and enjoy ourselves.

“It’s great to win the Cambrian for the first time. You always start a rally with the aim of an outright victory and that’s our first of the season and I’m delighted.

“It makes the battle for the British Rally Championship title very interesting. I’ll have to sit down and work out the points permutations, but it’s between Matt and myself now and of course the points to drop will play a significant role in the outcome.

“But looking back at the season so far, I couldn’t have really done a lot more to give myself a better chance of lifting the trophy and I have to be happy with that.” 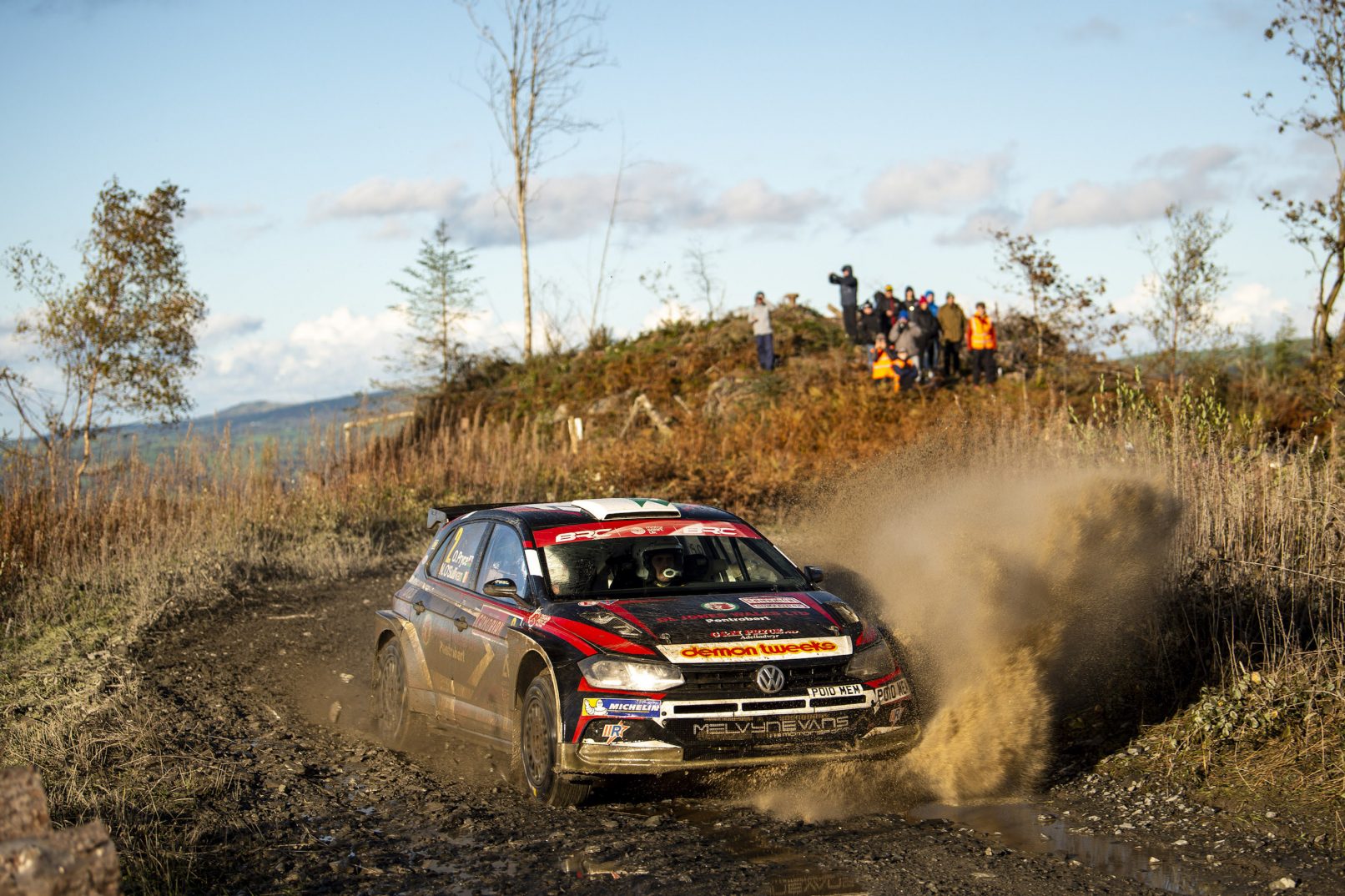 In with a chance of becoming BRC champion on the Cambrian!
One step away from becoming British Rally Champion!