Pryce on flying form at Pembrey

Osian Pryce was an incredible 7th overall in his faithful old front-wheel drive Ford Fiesta ST when a mechanical problem forced him out of the West Wales Rally Spares JAFFA Stages at the Welsh Motorsports Centre at Pembrey.

The cold and slippery conditions played into Osian’s hands, as he used his expert driving skills to overcome the huge power disadvantage he had over his rivals.

Co-driven by Jess Hockly, Osian was 15th overall after the opening stage, 9th after SS2 and 7th after SS3 – flying, until a transmission problem forced him to stop on SS4.

“We were having great fun in the slippery conditions, but on stage four I had to ‘phone the team and say ‘bring the trailer, I’ve parked up, we’ve broken down!’” said Osian. “We were running well inside the top ten before a strange problem with the gearbox on the penultimate stage meant we couldn’t go any further. A big thanks to Jess for sitting in the co-driver’s seat and for helping with the prep of the car, and thanks too to everyone involved with organising a fantastic event and allowing us to have a spin down at Pembrey over the Christmas holidays. Despite the not-so-good end result, we still enjoyed it – which is what it’s all about.” 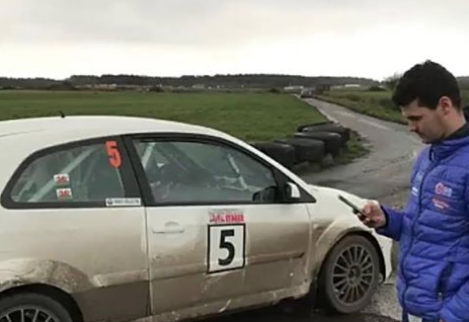