Safari Bites Back As Osian Hits Steering Problems In Africa

Day three of the East African Classic Safari proved to be a difficult one for Osian Pryce, as the unforgivingly rough rock-strewn terrain broke the steering on his Ford Escort RS1600, leaving him stranded in the wilderness.

Having hand-built his own rally cars in the past, Pryce is a dab hand with the spanners and his mechanical expertise allowed him and co-driver Dale Furniss to repair the Minti Motorsport-run Mark 1’s steering on the roadside.

However, the unfortunate delay sees the Machynlleth man drop from fifth to 11th in the overall standings.

“It was a day of two halves,” admitted Pryce. “We had an awesome start to the day, setting a fastest time through the opening stage. The second stage started well, but the car cut out on three separate occasions in some water, which was very strange as the car was fine through water yesterday. Because of that we dropped nine minutes.

“The final stage of the day was 116 kilometres long through some of the most stunning scenery anywhere. Avoiding a giraffe early on was a surreal feeling but shortly after we noticed there was play in the steering, to a point where it gave up sixteen kilometres from the end. We managed to take the steering rack off the car, re-build it in the stage and re-fit it to the car, but we were out of time.

“Thanks to the course officials for looking after us and giving us a hand to get out of the stage. We have dropped to eleventh overall, but there is still a long way to go.” 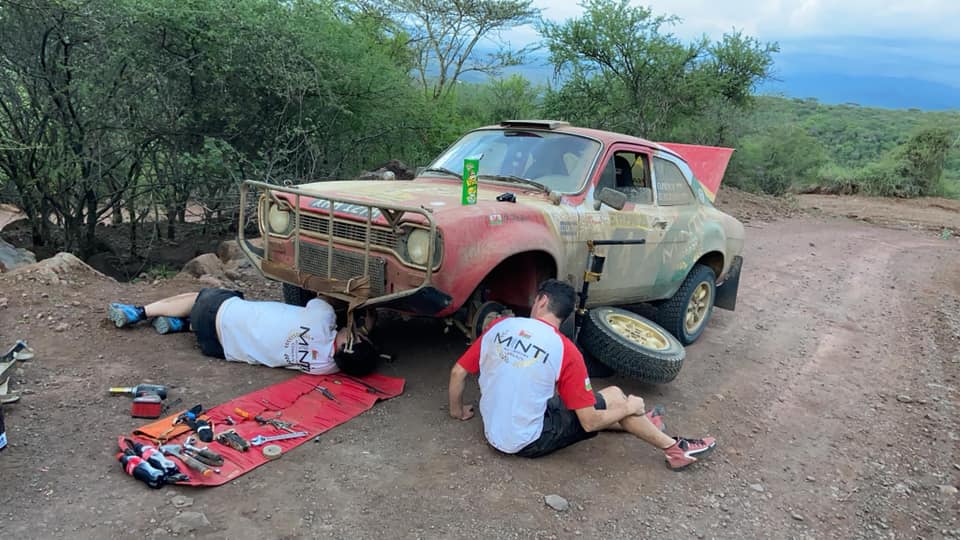